After launching to space on both NASA’s Space Shuttle and then the Russian Soyuz rocket, Sunita (Suni) Williams will be one of the first female NASA astronaut to fly onboard the new US commercial vehicles being developed. Suni, who formerly held the record for the longest EVA (spacewalk) time by a female astronaut, was chosen along with astronaut colleagues Robert Behnken, Eric Boe and Douglas Hurley to be the first 4 NASA astronauts to fly aboard the future Boeing CST-100 and SpaceX Crew Dragon spacecraft.

[Update]: In August 2018 it was announced that Suni would fly alongside fellow NASA Astronaut Josh Cassada to the International Space Station (ISS) on the Boeing CST-100 Starliner first post-certification flight. The first female NASA astronaut to fly to the ISS on a US commercial crew vehicle will be NASA Astronaut Nicole Mann, alongside NASA Astronaut Eric Boe and former NASA and current Boeing Astronaut Chris Ferguson. Nicole is set to fly onboard the Boeing CST-100 Starliner’s upcoming crewed flight test. Suni’s ISS flight will follow this flight test and will be a long-duration six-month flight onboard the ISS.

Boeing and Space X were awarded contracts by NASA in September 2014 worth $4.2 billion and $6.2 billion each respectively, to develop the next generation of crew transportation to low-Earth orbit. The  2015 crew selection announcement was made by NASA Administrator Charles Bolden with the selected astronauts including Suni training with the commercial carriers. 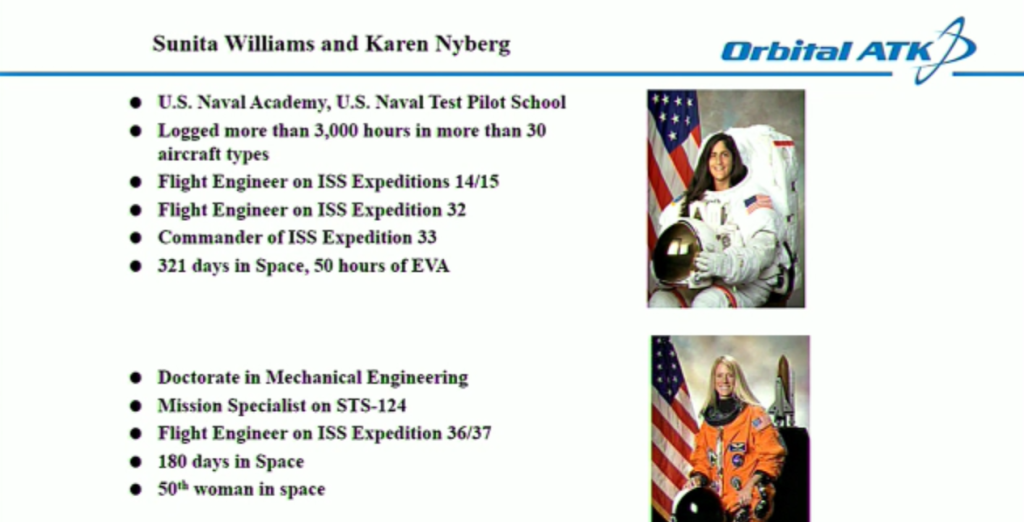 Get to the starting line

Suni discussed career advice for aspiring astronauts, emphasizing that “Understanding how things work and being an engineer led me to become a helicopter pilot and eventually to JSC. The path doesn’t necessarily have to be straight, but don’t limit yourself to what you know. Go out and try new things. Some of those things when I was young I would’ve considered a failure, but you just need to get to the starting line.” Karen added that her older sister used to laugh and say it was cute when she said she wanted to become an astronaut. However after an internship at NASA Johnson Spaceflight Center she knew that it was the career path for her ,“and here I am”.

Understanding how things work and being an engineer led me to become a helicopter pilot and eventually to NASA. The path doesn’t necessarily have to be straight, but don’t limit yourself to what you know. Go out and try new things. – NASA Astronaut Sunita Williams 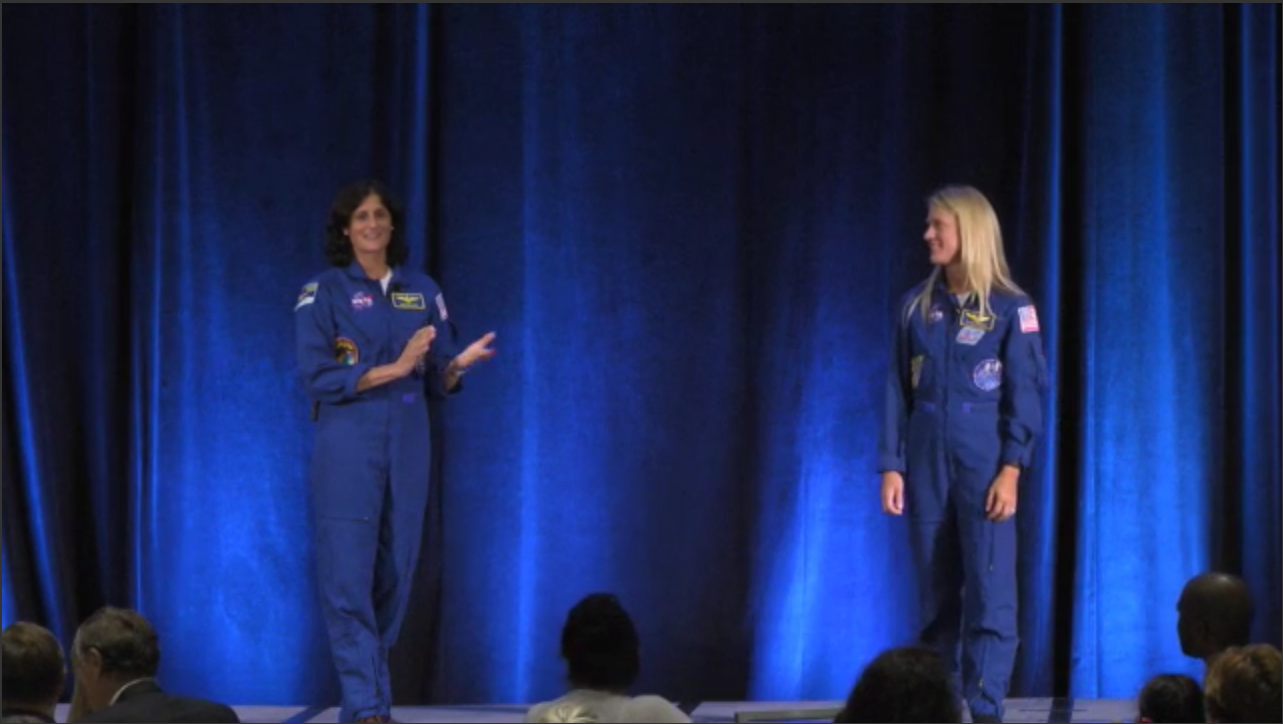 Don’t forget the things you learned at Kindergarden

Suni’s next piece of advice was, “Don’t forget the things that you learnt at Kindergarden”. She recalled the experience of living on the ISS with “people from different cultures and backgrounds, people from all over the world”. Suni’s first mission to the ISS as part of a Soyuz crew of 3, was with an American and Russian, with her most recent with only Russian cosmonauts. She highlighted the international nature of spaceflight through her experience of training with an ESA astronaut and acting as backup crew for a Canadian & Russians. Suni described the sometimes stereotypical view, especially outside of North America that, “Canada, you think just above, is close to being American, but it’s very different.” She also sometimes forgot that her Japanese crewmember was from Japan, as he went to school in US. She described her 6 month missions on the ISS as “a marathon not a sprint”. She discussed the fact that astronauts have to prepare for any incidents that happens on the ISS when the crew are asleep, with the ISS systems and controllers waking the crew up at night if anything was happening. Before her flight she wanted to make sure she was prepared. Discussing the nuances of international work culture, her Japansese crewmate, Aki Hoshide, wanted to “just work Japanese style” Amusingly Suni finally got him to stop working by putting on the TV show Family Guy at 6pm.

Always do your best. Always clean up after yourselves. Admit you’ve made a mistake. – NASA Astronaut Karen Nyberg

Karen added that her philosophy was to “Always do your best. Always clean up after yourselves. Admit you’ve made a mistake”. She described astronauts on the ISS as being a “Jack of all trades up there, including scientists. For some science, we get the experiment rack up and running and leave it alone. Sometimes we get to talk to PIs (Principle Investigators)” which is her favourite time. She said that during her work on the ISS she was “always thinking about the people on the ground and doing her best, knowing how important that experiment is to that person”. Karen admitted that once she “changed up” the wrong igniter in combustion rack and delayed their research for a long time, feeling so awful afterwards.

She went on to describe a popular topic fielding questions. “Urine collections is a technique.” Her first time attempting this, “was a disaster, I made a mess, and used so many dry wipes than allocated. By end it was easier with a hose and I got better with it.” But she missed the first data point for the research and knew that “data means so much to them”.

“Urine collections is a technique.” Karen’s first time attempting this, “was a disaster, I made a mess, and used so many dry wipes than allocated. By end it was easier with a hose and I got better with it.” But she missed the first data point for the research and knew that “data means so much to them”.

Stop and look at the foliage every now and again

Suni’s third lesson to the audience was to “Stop and take a look at the foliage. Just take a moment out and enjoy the journey”. She depicted coming back to Earth on the Soyuz as, “Anti climatic when you’re leaving the ISS and closing the hatch, in long underwear and doing leak checks.” You think “something’s exciting’s going to happen, then undock and sit there for whole orbit with the list of tasks in front of you.” She empathetically depicted the “ride home” as spectacular. “Your face is this close to the window and us knuckleheads are close to the fire. Russians in the middle seat. I was in the left seat, starting and stopping the procedures, not wanting to mess it up.” After deorbit burn she described the crew seeing pink outside the window and the window cover dramatically burning off. “The pyros are going off, we can’t talk to the ground. Then things calm down, the parachute deploys and you’re the walnut bouncing around.” Suni hoped the commercial crew that she had recently been selected to fly with, takes a note and learns from the Russians. Suni’s advice was to enjoy the time in space and the journey, mostly enjoying the work with the scientists on the ground.

Karen added that she wished everyone on Earth had 90 mins to see the view from the cupola on the ISS. She exercised on the ARED below the cupola, for an hour every single day. “I just took for granted that I was over the tip of South America again, 240 miles up. How many things on Earth that are magnificent that we take for granted very single day.“

Astronaut Sunita Williams summed up the sole reason for her outreach activities, “We’re trying to inspire the next generation”.

Suni and Karen described that for girls to be interested in STEM and a career in space, videos from a female astronaut’s perspective were very important, even those describing how to wash your hair in space. The HAM radio project was also surprisingly impactful, taking up a tiny slice of an astronaut’s overall training. Suni stated, “We have a whole bunch of things to do, do a spacewalk, grab a visiting vehicle. The HAM radio is 5 minutes and we speak to 10 kids. Sometimes it’s super clear. We get a report afterwards on how many people were at the event and how much time the kids took to prepare. There’s 1000 kids at an event which is pretty impactful. When you’re flying around, doing science experiments there are 1 or 2 people on the ground that are watching. You start to forget there’s a whole load of other people out there and it really chocked me up. HAM radio was huge and public events. When you’re talking to a screen, you don’t know how many people are down there. It’s better for me when it’s down there. I get really nervous when there’s a lot of people and I’m on a big stage.”

She summed up the sole reason for her outreach activities, “We’re trying to inspire the next generation”.