Confidence Is The Missing Key Factor 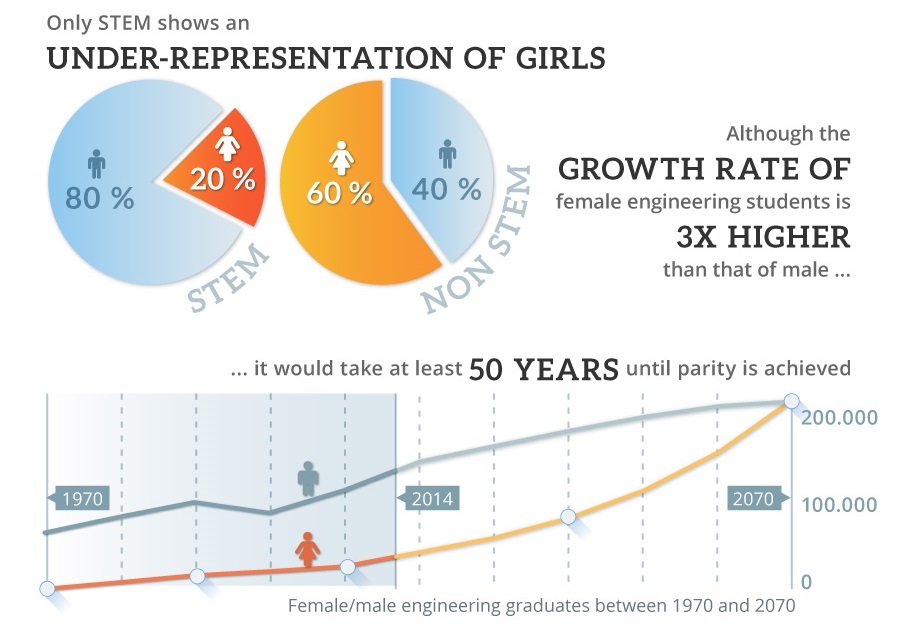 #BeBoldForChange was the theme to this year’s International Women’s Day. This great infographic by Trade Machines FI GmbH introduces the difficulties women have to face when deciding to enter the highly male-dominated field of engineering – an explanation for why only 13% of US engineers are female. (Copyright Trade Machines FI GmbH)

We may be aware of the fact that women are under-represented in STEM fields, but seeing the exact numbers of female representation is still startling: on average women comprise 19% of STEM students and 20% of engineering students in the United States. Other tech-related fields attract even fewer women. Women within electrical engineering fields represent solely 12% of the students while within computer sciences only 10%.

When it comes to engineering, not only are fewer women choosing these study fields than men, but it turns out, that even after finishing college 35% of women either choose to not enter the field or leave eventually, while this number is 10% for men. So what could be the reason behind this worldwide trend?

The American Sociological Association released a study (pdf) with the title ‘Women Aren’t Becoming Engineers Because of Confidence Issues’. The study pointed towards the lack of ‘professional role confidence’ as an issue for female engineering students. This eludes to female students not having as much confidence in their engineering competence as their male counterparts and doubting the fact that engineering is the career that fits them best.

But it’s worth looking at what could lead to such a lack of confidence. Why are women more affected by this than men?

As the study and the following infographic explains, there are several components to this complicated issue. The main reason might be, that a stereotype threat is still present according to which engineering is still assumed to be a male career. As the study said, “competence in engineering is associated in people’s minds with men and masculinity more than it is with women and femininity”.

While there is no quick-fix solution to this issue, there are actions we can take to support young women. In order to not lose those who are currently studying or who are already working in STEM (also known as the leaky pipeline syndrome), we need to make work environments more accepting and eliminate any residual “macho culture”.

It is also important that role models, successful women in STEM careers are visible and tangible to younger women considering their future career paths. It can be an excellent way for younger women to realize that engineering is just as much for women as it is for men.

We can additionally encourage girls to consider a STEM career in an even earlier phase of their life. According to Reshma Saujani, the founder of Girls Who Code, we need to start by raising girls differently. While boys are taught to be “brave”, women are often told to be “good” and therefore women ‘seek perfection and avoid taking risks’ with this potentially leading to missing out on great opportunities.

Female under-representation in engineering is clearly not because of a lack of capability but, as the study eludes to, because of girls not believing in themselves. In the words of Canadian-Indian poet Rupi Kaur, “What’s the greatest lesson a woman should learn? That since day one she’s already had everything she needs within herself. It’s the world that convinced her that she did not.” Not only do we need to change this in order to encourage girls to see themselves as engineers in the future, but also in order to ensure the next generation are more confident and believe in their potential. We need women supporting other women. How can you help a girl that you know to reach their potential?

(Disclaimer: This post was written in association with Trade Machines FI GmbH)

UN International Day of Women & Girls In Science 2018: Inspiring The Next Generation