50 years ago on this day, Edward White stepped out of his Gemini spacecraft into the vacuum of space and made history, becoming the first spacewalking American astronaut. Spacewalks are inherently risky endeavours summed up by NASA Astronaut Butch Wilmore as simply “being in the vacuum of space and attached by a little metal tether”, all the while orbiting the Earth at 17,100 mph exposed to Micrometeroid and Orbital Debris (MMOD). Ed White’s spacewalk,  taking place 77 days after the first EVA (Extravehicular Activity) by Russian cosmonaut Alexey Leonov, could possibly be described as one of the riskiest of all and set the precedent for the future of the space program. A spacewalk is performed outside the protective environment of a space habitat or vehicle. To survive the vacuum environment, the human body needs to be in a pressurised enclosure, which is precisely what an EVA suit (spacesuit) is, alongside a life support system. It’s essentially an anthropomorphic, mini spacecraft with the complexity of a large spacecraft. The design of an EVA suit may seem simple at first sight since they are covered with a fabric thermal micrometeoroid garment, but it is in fact one of the most complex technological developments to carry out.

Future spacesuit designers need to provide crew members with a comfortable interior pressure, sufficient flexibility, mobility and microclimate for a range of EVA activities, whilst minimising the risk of suit decompression. In case of an emergency, the suit needs to be able to be worn and removed with ease and rapidly whilst protecting the crewmember from micrometeoroid penetration or puncture. As NASA says when it comes to spacesuits, “understanding the past and learning from mistakes is the only way to progress”. Once on the surface, the environmental challenges faced on Mars and near-earth asteroid surfaces along with potential EVA durations likely exceeding the cumulative length of every Apollo EVA and would require the design of a versatile and rugged suit.

NASA’s Apollo suits were the first to have plaster hand casts and full body casts created for the crewmembers, improving suit fit. Astronauts today have custom-made EVA gloves only, developed using laser scanning, hand casting, 3D computer modelling, stereo-lithography, laser cutting and CNC machining. To allow mobility, the Apollo suit design ensured that the astronaut could easily translate and flex his fingers even with the tendency of its internal pressure to make it a rigid balloon. This still required significant effort and forearm fatigue due to the glove pressure limited productivity. The Apollo suit was redesigned for the Apollo 15-17 missions to allow the number of lunar surface EVA periods to increase to three and an extension of each EVA to eight hours. Improvements were made in the Apollo suit gloves introducing more bonded and moulded components with an increase in the diameter of the glove wrist disconnect to provide greater wrist comfort and making them easier to wear.  With the lunar rover vehicle (LRV) used for the first time during Apollo 15, the spacesuit needed additional waist mobility and improvements to the integrated micrometeoroid garment (ITMG) in its abrasion resistance against the effects of lunar dust.

Lunar dust proved to be a significant problem for the Apollo missions due to it’s highly abrasive nature and caused problems including coating the suits causing seal failures, abrasion and irritation when inhaled by the crew. Lunar dust compromised the ability of the astronauts to re-seal their suits after an EVA, with Apollo 12 astronaut Pete Conrad’s suit after his EVA developing a leak rate of 0.25 psi/min, just below the safety limit of 0.30 psi/min. A 3rd EVA would likely not have been possible if needed. The environmental lunar sample seals also failed resulting in sample contamination. The lunar dust was so abrasive that the astronauts’ suits were worn through the outer layer and into the Mylar multi-layer insulation above the boot. Dust scratched the Apollo 16 suits’ gauge dials to leave them unreadable. The abrasive effect of lunar dust on spacesuit and seals is a major problem for long-duration missions where habitat airlocks or spacesuits will be sealed on a regular basis and needs to be taken into account during future suit design. 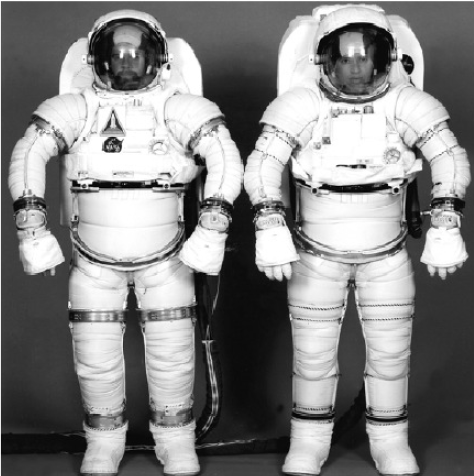 The enhanced EVA suit (left) currently used on the International Space Station (ISS) was developed with the requirement that the number of EVAs required for ISS construction would be greater than all of the previous spacewalks conducted by all of the world’s space programmes. The financial constraints relating to the U.S.’s contribution to the ISS program meant that the Shuttle EMU was upgraded rather than developing a new concept. The new enhanced suit provided easier on-orbit sizing and improved custom glove fitting with a heating system.

Lessons are still being learnt to this day, with a major issue discovered within the suits recently. During an EVA on 16th July 2013, ESA astronaut Luca Parmitano felt water inside his helmet on the back of his head. The amount of water in the helmet increased migrated from the back of his head onto his face. The EVA was terminated early and the crew re-entered the ISS allowing the suit to be removed. Luca also reported impaired visibility and had to breathe with water covering his eyes, nose, and ears. He also had audio communication issues because of the water and had to rely on manually feeling his safety tether’s cable, attaching him to the ISS structure, for pathway directions back to the airlock rather than relying on his sight. It’s the closest call to this date during an ISS EVA with the amount of water in the helmet estimated to be 1-1.5 litres. This particular issue had been caused by a failure of the fan/pump/separator component within the spacesuit, which was subsequently replaced. Astronauts also now install a Helmet Absorption Pad (HAP) inside their helmets to absorb potential water that may enter their helmet. Along with regular glove inspections during an EVA, astronauts will also carry out HAP inspections to feel whether the HAP is “squishy” (A NASA technical term) indicating that it may be holding 200 milliliters of water at the minimum. Up to 600 to 800mL of water can be held by the pad, giving the crew time to return to the safety of the airlock. Water Line Vent Tubes or snorkels have also been installed inside the suit using velcro allowing the crew to breathe from the drier Torso Section of the suit in case of a serious mishap .

In February this year, astronaut Terry Virts also reported water in his helmet when back in the ISS airlock post-EVA, during repressurization caused by sublimator water carryover. Water present in the suit’s sublimator cooling component can condense as the suit is repressurized after a spacewalk. This caused a small amount of water to push into Virts’ helmet however this is now a known and NASA accepted EVA risk. Tackling these issues related to EVA suit design including the effect of lunar dust and glove design will be a challenge, but is currently being investigated.

EVA is a proven capability for meeting mission objectives and is critical to the ISS, with a current total of 1159 hours 8 minutes of EVA having been completed in ISS maintenance and assembly. The lessons learned over the last 50 years of spacewalking are essential to develop a future EVA suit for long-duration human exploration missions including a mission to Mars, needing to withstand the deep-space and Martian environments.