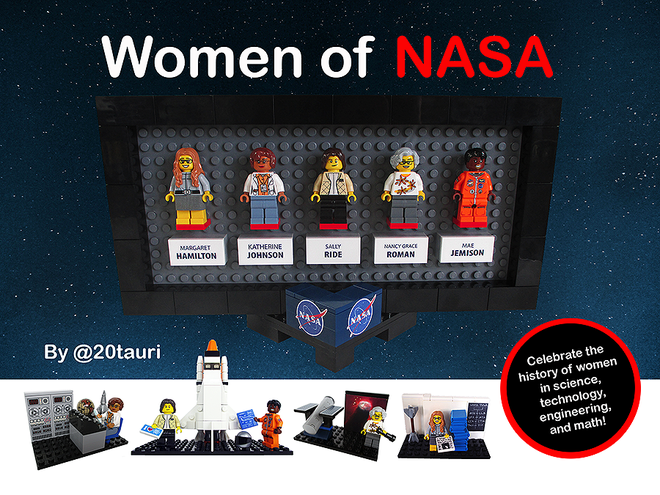 Katherine Johnson, Sally Ride, Margaret Hamilton, Nancy Grace Roman, Mae Jeminson. These five names of women at NASA, although unfamiliar to the public at present, will hopefully soon be immortalised and their trailblazing stories used to inspire the next generation. A fantastic LEGO “Women Of NASA” set featuring the two astronauts, Sally Ride and Mae Jeminson – the first American woman in space and the first African-American woman in space, and three scientists is ready to be voted for on the Lego Ideas website. If the set receives 10,000 supporters it will be one step closer to becoming a commercial set available in stores!

“Women have played critical roles throughout the history of the U.S. space program, a.k.a. NASA or the National Aeronautics and Space Administration. Yet in many cases, their contributions are unknown or under-appreciated — especially as women have historically struggled to gain acceptance in the fields of science, technology, engineering, and mathematics (STEM).

This proposed set celebrates five notable NASA pioneers and provides an educational building experience to help young ones and adults alike learn about the history of women in STEM.”

Read more about the Lego “Women of NASA” set here.

UPDATE: Lego has announced that the “Women of NASA” set is set to become a reality! The set featuring ‘Hidden Figures’ Katherine Johnson, Margaret Hamilton, Nancy Grace Roman alongside NASA astronauts Sally Ride and Mae Jeminson, has been approved to production and will be coming to a store near you soon! I’m excited for the conversations this set will bring, from the parents teaching their children about the stories of these inspirational women as they build the set to how the set will help to show that a career in space is for everyone.

If you’re wondering what to buy your 9 year old niece for Christmas this year, then look no further.

Goldieblox, the company founded by Stanford engineer Debra Stirling, has added to their mission to ‘disrupt the pink aisle’ by releasing a new doll and campaign against ‘Big Sister’. Their previous ad campaign earned them an ad slot during the 2013 Super Bowl.

In their new ad, girls dressed in strappy heels and pink dresses, line up to take pretty, skinny Barbie-esque dolls from a conveyor belt, with ‘Big Sister’ on screens conveying in an Orwellian overtone, “You are beauty, and beauty is perfection.”

One girl in the line-up however, doesn’t conform to pick up a doll from the conveyor belt, but destroys the screen using a hammer and alters the machine to create Goldie, a doll with blonde curly hair, red ‘Chucks’ and a hammer. The ad with the tagline, “Other dolls are built for fashion, Goldie is built for action”, should help to promote brains over beauty, essential at a time when girls decide by the age of 11 to move away from science. Something that Disney’s Frozen Elsa doll and Barbie are lacking. A recent study also suggested that playing with Barbies has an effect on young girls’ ideas on their place in the world and limits their sense of what’s possible in the future. 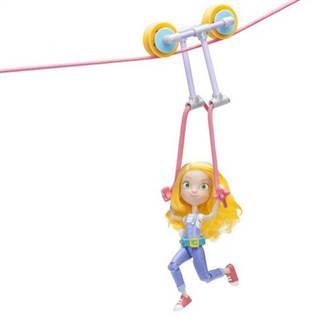 If I personally had to name the biggest obstacle that I had to face during deciding on a career path it would be overcoming preconceived ideals. I’d always known that I wanted to work in the space industry, however it wasn’t a career path that was expected for a girl, especially at an all-girls school. I had to prove to others around me and to myself that it was possible. If the Goldie doll helps to mould attitudes at a young age and encourages girls to study STEM, opening up the possibilities of a science or engineering-based career, I think it’ll make a difference in the career decisions young girls eventually make. It’s a fantastic gift idea with the doll being released just in time for Christmas!

Here’s my older post on Goldieblox’s previous ad and the importance of ‘Being Inspired Young’.

How To Be A Rocket Woman

How To Be A Rocket Woman: Being Inspired Young

“Girls To Build A Spaceship, Girls To Code A New App, Girls To Grow Up Knowing They Can Engineer That”

Lyrics from the fantastic new commercial by GoldieBlox, a company founded by Debra Stirling (Stanford graduate with a degree in Mechanical Engineering/Product Design), championing to “disrupt the pink aisle” with a toy that  introduces girls to the joy of engineering at a young age.

GoldieBlox’s vision for this video was to “showcase the amazing inventive power that girls have”. They re-wrote the lyrics to the Beastie Boys’ Girls and hired six engineers, Brett Doar (of OK Go! fame)  and three fantastic young girls to transform a  house into a “princess machine.” It’s such a refreshing take on commercials for girls’ toys and made me smile all the way through (and it’s catchy!). 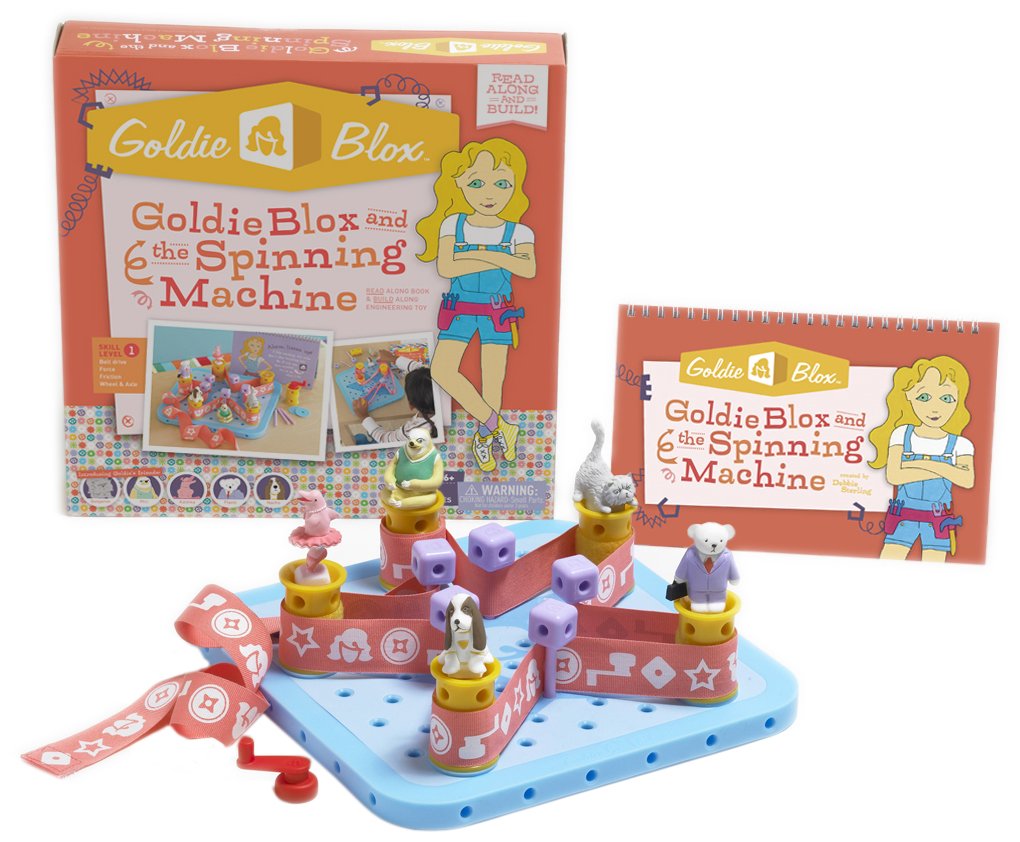 When first hearing about GoldieBlox last year I was pleasantly surprised that rather than developing something stereotypical, a pink lego sort of product per se,  it really seemed to have a solid basis. Debra Stirling has certainly done her research concerning gender differences, child education and how children learn and interact. Stirling built GoldieBlox using the notion that boys were more interested in building while girls generally prefered reading and other verbal skills. Therefore having a book incorporated into GoldieBlox helped the girls to stay focussed on that whilst carrying the out the activity alongside it. She stated last year that the boys playing with GoldieBlox liked to spin the dog as fast as possible until it fell off after completing the build, whilst the girls spun it gently using the ribbon. The success of GoldieBlox will hopefully continue to grow, with the new commercial a finalist to be aired at Superbowl (vote for it here!).

Maykah, a company formed by a group of three Stanford grad students is also aiming to inspire the next generation of female technology innovators. Their first toy Roominate inspired by an early dollhouse memory,  allows young girls to attach and custom-build a miniature room with working circuits to their dollhouse.

Influencing girls at a young age with toys like this, encouraging girls to build and engineer, really is the key to inspiring them and setting them on a course to consider STEM (Science, Technology, Engineering and Maths) at a later stage. LEGO, once described by Jezebel as simply making money through “girls conditioned to want pink and sparkly toys about ponies and princesses” rather than trying to change the status quo, has also released a new female scientist minifigure with a further set of female STEM career minifigures planned to come.

At a young age, I, although given Barbies to play with as a child, much preferred putting together train sets or toy car race tracks and playing with space shuttles, toys mainly targeted at boys with their product marketing and places in the toyshop aisle. I feel that being encouraged to play with these toys rather than shunned, played a large part in allowing me to start to understand physics and become inquisitive about how the world around me worked, especially when I was young before it feeling like simply school work (which it never was..). That wonder about the universe and how it was formed led me to where I am today working as Engineer with an background in astrophysics and space engineering. If toys like GoldieBlox had been around when I was younger, how many more girls would’ve decided to follow their true path towards learning about engineering and physics, rather than simply fitting in by playing with Barbies?

With girls deciding by the age of 11 to move away from studying science, toys like these are important to bring STEM  into their lives in an enjoyable way when they’re young and to prevent stereotypes from forming in the first place.

Personally I hope that these toys sell out at Christmas!