At Rocket Women, we’re thrilled to announce our partnership with Raising Orbit to bring you an exciting series of inspirational video interviews with trailblazing women in space!

On September 24th 2014 India broke into an elite club of its own after successfully placing the Mars Orbiter Mission (MOM) spacecraft in the red planet’s orbit, on its very first attempt. The next morning, photographs of jubilant ISRO scientists were plastered across newspapers. Smiti Maini Dhami was one among them—a confident young woman basking in the success of MOM or the Mangalyaan.

Smiti who currently works as a Spacecraft Operations Engineer at Telespazio Germany GmbH for EUMETSAT, says she has come a long way since her early days at ISRO and her passion towards space science has been driving her.
“It (MOM) was my first project as a design engineer …and it was a very challenging project. The schedules were very tight, we had a lot of sleepless nights and a lot of testing. But it was thrilling and exciting at the same time. So, I really enjoyed being a part of that mission at a very early stage in my career. I learned a lot,” recollects Smiti while talking to the Raising Orbit team from her residence in Germany.

Smiti also cheerfully reminisces the “surreal meeting” with her childhood inspiration Dr. APJ Abdul Kalam during the MOM programme. Agreeing that the final moments during theMars Orbit Insertion were “nail biting” indeed, Smiti says that she enjoyed observing the spacecraft operations from the mission control room. “It was extra special as it was very challenging because of the complexity of the mission,” she adds.

While there are deliberations in general that the science returns of ISRO could not match other missions like MAVEN, Smiti says that the academia and science community are supposed to come together to see what could be derived out of this mission and the data gathered by it’s scientific payloads. Calling it a very important stepping stone to place India on the global map of space exploration, Smiti adds: ISRO’s MOM has successfully proved to be a technology demonstrator for validating India’s capability. Following the footsteps of her father, a surgeon, and her mother, a post-graduate academician, Smiti was naturally attracted to science. Fascinated by aircrafts and satellites, Smiti chose aerospace engineering, after her schooling.

If there is one thing that Smiti has carried with herself from the time she grew up in Delhi, it is the motto that change is imminent and one shouldn’t be afraid to face it. Smiti’s career progression is testament to how challenges can be overcome with perseverance, tenacity, hard work and the sheer power of will. Even after joining UTC Aerospace Systems as a graduate engineer trainee for Aircraft Evacuation Systems after her engineering, Smiti’s passion to learn, drove her to take up a Masters at National Aerospace Laboratories (NAL). Back then, little did Smiti know that a newspaper advertisement would change her career trajectory and would land her in India’s national space agency where she’d end up working on AOCS (Attitude and Orbit Control Systems) design for many Indian spacecraft missions of national and international importance for more than eight years. But it came at the cost of a very tough decision— discontinuing her studies at NAL.

“I know that change is difficult but what I also know is that change is inevitable. So, a very important part of my decision-making is to take the lead and see where things go. It’s easier said than done, but it involves a lot of thinking.”

At ISRO Smiti worked on one of the critical subsystems for any spacecraft mission, the Attitude and Orbit Control System (AOCS) which controls the attitude (orientation) and position of a spacecraft. AOCS could be described as the brain of the satellite. It comprises sensors, actuators and on-board computer. Information about spacecraft orientation and position is obtained from various sensors. For example: star trackers, sun sensors, earth sensors, gyros, accelerometers, GPS receivers etc. The on-board computer then processes these measurements, compares them with respect to reference or expected values and commands the actuators (e.g. reaction wheels, thrusters, magnetic torquers etc.) to modify the position or orientation as required. A detailed explanation on the GNC and control system can be found here.

Last year, Smiti made a personally motivated decision of moving to Germany. In her blog, The Drifting Satellite, she writes that she has brushed up her school German lessons to sail through life in the new country she now calls home. While she found a job in the space industry in Germany, she had to switch from the field of spacecraft design to operations. Having worked in both design and operations phase, Smiti who has a decade’s experience in space industry finds the operations phase to be “less chaotic” than the design and development.

“(Design) is a more flexible phase since one has the option to change, iterate, test and
redesign.”

“Since, I am new to operations, I have a lot to learn. I am happy that my present work is new enough to keep me engaged and motivated to learn new stuff; and it’s also familiar enough not to make me feel lost,” asserts Smiti.
While she agrees that her experiences as a woman in STEM (Science, Technology, Engineering and Mathematics) has been different since she grew up in a gender-neutral environment and had no qualms in pursuing her dream, she acknowledges that more women should be encouraged to take up science. If there is something Smiti echoes consistently, it is: Embrace the challenges and changes that come along, if not now, maybe never later. 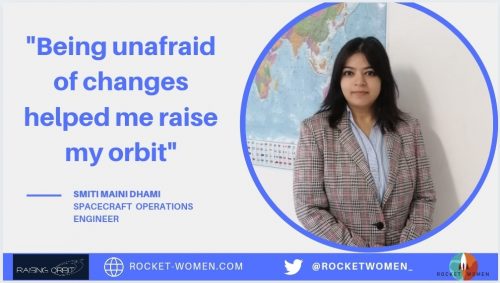