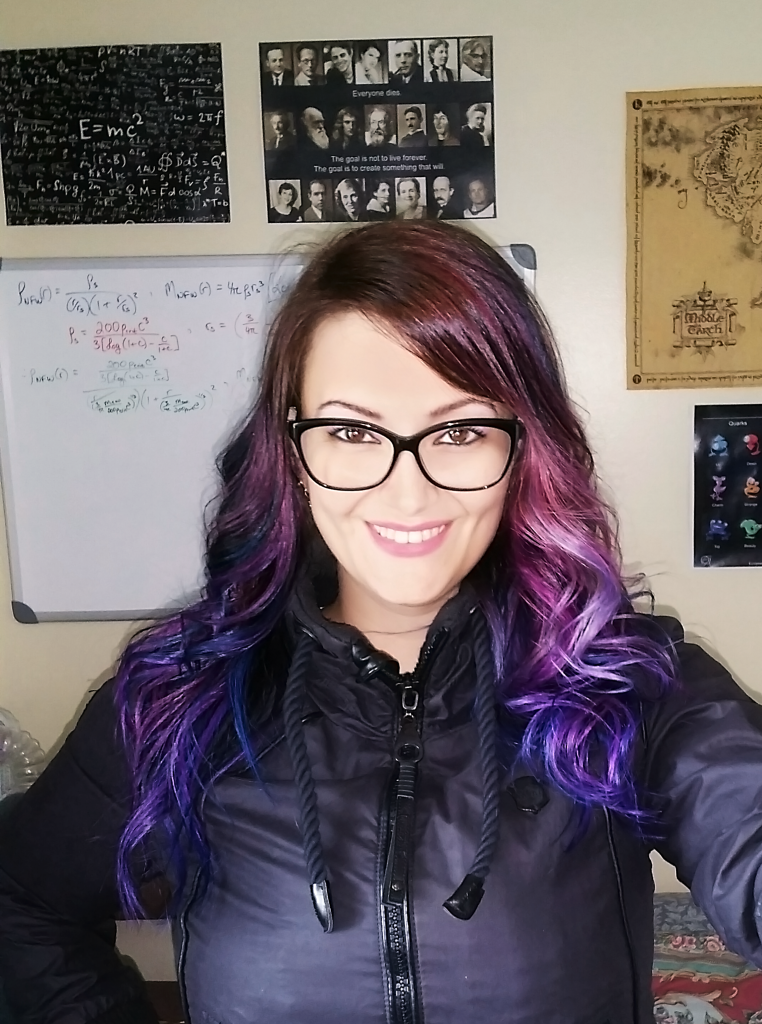 Trailblazing Astrophysicist Sophia Nasr on her career in astrophysics, overcoming societal barriers, realising her own dream and the one piece of advice for her 10-year-old self.

On being inspired to choose a career in astrophysics:

I began my undergrad not quite knowing what I wanted to do. I had a “dream” of being a medical doctor imprinted on my brain (I put “dream” in quotes because it wasn’t really my dream—it’s what my father’s dream was). I knew I needed to discover who I was.

As a child, the questions that fascinated me were all related to space: What are black holes? What is dark matter? How did the Universe begin, and how will it end? Does life exist beyond Earth? (How could it NOT exist beyond Earth in such a vast Universe?!) With all we know about this Universe we live in, there’s far more that we don’t know, and these questions burned like embers in my mind when I began my undergrad. That’s when I realized I wanted to study astrophysics, to be able to work on figuring this type of stuff out. So, I enrolled in the program, and a couple of years down the road, I met a professor who I’d work with for the rest of my undergrad (and continue to work with today): Dr. Sean Tulin.

Under the supervision of Dr. Tulin, I started working on a type of dark matter that interacts with itself, called Self-Interacting Dark Matter. The beautiful thing about this research is that I get to use all my favorite disciplines to tackle problems we are trying to solve: cosmology, particle theory, and astrophysics! It was through this research that I realised astroparticle theory was what I wanted to work on. This is when I knew I wanted to dedicate my life to physics. And, here I am, off to work on my PhD in Physics at UC Irvine this fall!

My biggest role model was Albert Einstein. I loved his brilliance, and always wanted to have a brain that worked the way his did.

On the brilliance of Albert Einstein:

My biggest role model was Albert Einstein. I loved his brilliance, and always wanted to have a brain that worked the way his did. It probably stemmed from my affinity with mathematics, which I probably owe to my Dad; he has a PhD in Applied Statistics, and as a child, he’d teach me math beyond the elementary school curriculum. I loved it so much that when I wanted to play a game, I’d ask my dad to make me a math test! And I think I wanted to build a brain like that of Einstein. I laugh saying this now, not because I think Einstein is out of my, or anyone’s, league, but because everyone is different, and being “brilliant” comes in many forms.

I also enjoyed Bill Nye’s TV show “Bill Nye The Science Guy”. But I also had different role models—singers, and actors. I really liked the entertainment industry and wanted to be part of it. I think my childhood was a rather diverse one.

I thought I’d likely end up in some medical field during my youth. I also enjoyed music, singing, and playing guitar, so I thought these things would be part of who I would become. Eventually, I realized physics was where my heart lies, in those burning questions that remain unsolved today.

Sophia Nasr working out equations for her dark matter research

On whether there was anything unexpected during her career journey:

Absolutely. For starters, I thought I’d likely end up in some medical field during my youth. I also enjoyed music, singing, and playing guitar, so I thought these things would be part of who I would become. Eventually, I realized physics was where my heart lies, in those burning questions that remain unsolved today. That being said, I plan to pursue the entertainment industry, using my knowledge of physics to help people learn about this mysterious Universe we live in, and make learning about it fun!

On what helps her get through a stressful and bad day:

One easy answer to this—my hamster Neutrini! You may wonder about his name, and it came from these “tinisymmetric particles” I came up with (tinisymmetry is not a theory, it’s just a naming scheme for furry little friends, taking a particle and replacing the last letter with an “i”, or appending an “i” to it, depending which particle it is). So Neutrini is the tinisymmetric partner of the neutrino, and I named him that way because he’s tiny, very quick, and when I first got him, he was so reluctant to interact that when I’d put my hand in his cage, he’d seem to run through it, much like neutrinos just pass through matter! Now it’s less of an issue as he’s grown more comfortable with me, so I take this development as me having become a really good detector.

Animals in general get me through bad days. I tend to be great with squirrels, and most of the ones on campus know me because I carry a bag of peanuts for them! 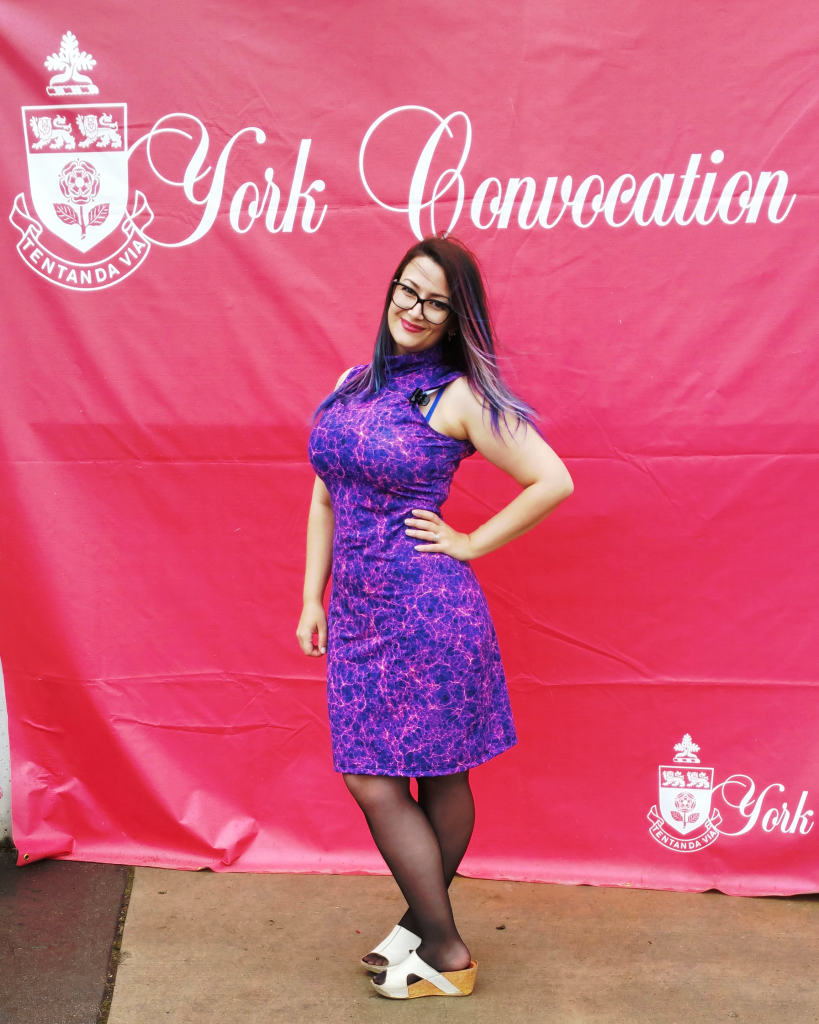 Sophia graduating from York University, with a B.Sc. in Astrophysics with Specialized Honors. Wearing a custom dark matter print dress from Shenova Fashion! The dark matter print is from the Millennium Simulation. #GeekChic

On following her own dreams:

As a child, I thought I’d end up in the field of medicine because it was my father’s dream, what he wanted me to be. I later learned I loved playing the guitar and singing! I have an electric guitar that I eventually stopped playing because I didn’t have an amp, so it didn’t sound good playing without one. I still have my guitar, and perhaps will take on learning it again sometime.

On whether science has become more inclusive for women:

I want to say it has, but the disparity remains. Faculty in physics are by far men, white men, with women comprising only a small percentage. I am pleased to say that the number of women going into the fields of physics and astronomy has grown, which tells me that change is on the horizon! There are, however, remaining concerns with regards to the treatment of women in the field, and these need to be addressed. Women need to feel safe going into the fields of physics and astronomy, and feel safe remaining in them. It’s not enough to bring women into the field, when they may leave anyway due to issues like harassment.

We need to listen to people of colour, to hear what they say, and help solve these problems and make them feel safe going into these fields, and again, safe to remain in these fields.

I am also concerned with the disparity between people of colour versus white people in the field. This stems from societal barriers people of colour face. This needs to be addressed. We need to listen to people of colour, to hear what they say, and help solve these problems and make them feel safe going into these fields, and again, safe to remain in these fields. This was probably the most noticeable gap I saw in my undergrad, and we need to work to change this.

While I’m speaking only of physics and astronomy because this is where my experience comes from, this can be said of most STEM fields. And these problems need to be addressed now. Not tomorrow, but right now. We have a world of women and people of colour that are being discouraged about getting into these fields due to societal barriers. We cannot allow this to continue.

Would I change things? I can’t say I would, because if I did, I might have just fallen into a dream that wasn’t mine.

On the one piece of advice for her 10-year-old self:

One piece of advice to myself: Don’t feel like being good at maths makes you an outcast (because I did feel that way).

One piece of advice that I’d give to any 10-year-old child: Never feel discouraged to be who you are, to do what you want to do and what you are good at. You are the determining factor of what you love. There will be obstacles, but never stop aiming for your dream, whatever that dream may be.

Would I change things? I can’t say I would, because if I did, I might have just fallen into a dream that wasn’t mine. I think I needed to take the path in life I did to get where I have. I’ve learned things I’d otherwise never have known, and in the end, discovered myself, who I am, what I’m good at. And I can say I’m genuinely happy today.